Don’t be afraid to throw away your words. They’re not sacrosanct. 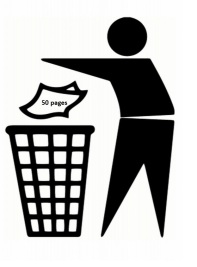 Don’t be afraid to throw out your early pages.

When writing many of my non-fiction books including AK-47: The Weapon that Changed the Face of War and Cults That Kill: Probing the Underworld of Occult Crime, I generally threw out the first 50 or so pages during rewrites.

It takes a while to get your writing motor running,  to find your voice, which can change depending upon the book you’re writing. For me, the process takes about 50 pages. Some fiction writers swear that it takes them 100 pages before they hit the proper  voice. These first hundred pages then get tossed in the trash.

Rest assured that this is normal.

First, what is voice?

I like to think of voice as having two components. The first is the author’s style. It’s who you are, your personality, the way you see the world. Are you a serious person or a wise aleck? Clever or subtle? Upbeat or a downer? These traits are reflected in how you write. They belong to you, so own them. This voice generally stays the same but can change somewhat based on what you’re writing. When I write serious non-fiction, one side of my personality shows through, the journalistic, down-to-earth side. When I write novels, my less serious side shows through. However, my basic writing style – which I define as accessible, easy to understand and ‘talk-directly-to-the-reader’ – is always the same. That’s who I am as a writer.

The second meaning of voice is the speech, tempo and chosen words of the narrator. Is the dialogue long-winded or fast-paced? Do the words fit the time frame and environment? Is the narrator convincing? Does the dialogue sound true?

In most cases, the first kind of voice generally stays the same – with mild exceptions – because it’s you. The second will change with the story.

Now, back to finding your book’s voice. My method (and that of many writers I know) is to let the draft sit for a while, as long as several weeks or a month. When you come back to it, it’s as if you’re seeing it for the first time. Now, instead of reading it as the writer, you’re reading it as a reader.

Trust your instincts and your first reactions to the book. Be honest and objective. Keep your ego in check. It may sound trite but ask yourself: Is the book true to who I am, what I want to say and how I want to say it?

When I wrote Cults That Kill, I realized that the stories were so bizarre that readers would have trouble believing it. When I read my first 50 pages, I could barely believe the stories myself even though my reporting was solid. To make the book more credible I decided that I shouldn’t be telling the stories, but let the real-life police officers and cult practitioners tell their own stories in their own words. The book changed from my reporting on their experiences to first-person accounts that rang true. Although I edited their words, and put them in the proper locations, juxtaposed with other accounts, they were speaking to my readers directly and honestly. This produced a powerful and convincing book.

My first voice stayed the same, easily accessible and open to the reader, but the second voice changed to suit the material.

Had I not let the first 50 pages marinate for several weeks, I might have missed the credibility  issue that I was able to fix by turning the book on its head.

I was not afraid to start over to find the book’s proper voice.