If You Insist on Having Writer’s Block, Here’s Help.

As I’ve said hundreds of times before: “Do plumbers have plumber’s block? Do doctors have doctor’s block?” No. There are no such things, so why do writers think they’re special? 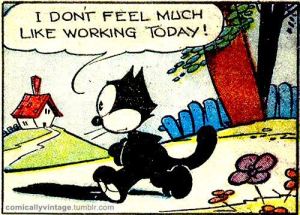 I’m not going to answer that now. Instead, I’m going to help those who actually believe there is such a thing as writer’s block, but I’m going to call it “I-just-don’t-feel-like-working-today-but-it’s-not-because-I’m-a-writer syndrome.

Here are my tricks to work when I don’t feel like working:

1 – Set a time limit. I say to myself that I only have to work for 15 minutes but I have to write something. After that, I can stop. This works amazingly well because your brain sees an end to a difficult task so it’s okay with getting started. What always happens, and I mean always, is that I get on a roll and keep going. This works great for non-writing jobs, too.

2 – Jump in the middle. Sometimes I don’t have a clear notion about what I’m supposed to write now so I sit idle. By writing what I do know – even if it’s not the main idea or where I’m at in the story  – it gives me some wordage. For example, write a scene that takes place a few pages or even a few chapters to come. Hooray, you’re writing.

4 – I think of the saying by author Larry Kahaner (that’s me): “Professional writers don’t have muses, they have mortgages.” I write to make money. That’s enough motivation for me.

5 –Leave yesterday’s work on a high note. I hear tell that Hemingway did this but I thought of it on my own. When I leave work for the day, I don’t finish what I’m writing. Instead, I stop when I still have more things to write. I make a note right in the text about what comes next like “Mike gets into trouble with his boss.” When I start the next day, I’ve got a place to start, something to write about immediately. This always works.

6 – Here’s a radical idea: stop writing. This may sound harsh, but if writing is so difficult that it gives you pain, produces headaches, makes you feel bad about yourself or brings on depression, then maybe it’s not for you. There is no shame in not being a writer. There are lots of other things to do with your time that will make you happy. There are plenty of books in the world already. If you don’t write one, it may be a loss to the rest of us, but at least nobody will die because it wasn’t written. And, if you don’t write it, who would know? Yippee. You’re free.

6 thoughts on “If You Insist on Having Writer’s Block, Here’s Help.”