Many writers, including me, suffer from the Zeigarnik Effect, but I never knew it until yesterday.

You don’t need Men in Black to erase your memory. You’ll do it on your own.

I was listening to one of my favorite podcasts Stuff to Blow Your Mind and the hosts were  discussing lists, how they help you finish tasks, why we love them (think listicles) and, as an aside, can be considered a form of literature, according to author Umberto Eco.

They made the point that lists work because we remember unfinished items on our list but once we complete the to-dos, we often can’t recall the tasks.

This is a variation of the Zeigarnik Effect.

For example, after someone reads one of my books and starts mentioning parts they found especially interesting, or would like to know more about, I often find myself having no idea what they’re talking about. I’ve simply forgotten what I wrote. Usually, I engage in vague small talk until I can reach back into my noggin and retrieve some nugget that makes it sound like I really wrote the book. Other times, I come up with a delaying strand like “what exactly would you like to know more about,” or “what made you key in on that?”

Before I do a radio or TV interview, I find myself skimming my book and taking notes. 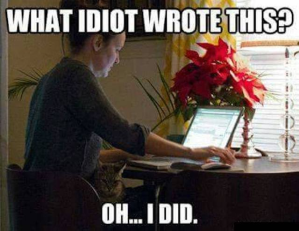 I’ve talked to other authors and they have the same issue. Once they write something, it flies out of their brains like a flea from a skillet.

I have a close writer buddy who also reviews books for Publishers Weekly. When I told him about the Zeigarnik Effect, he said: “Never knew it had a name. When I finish [reviewing] a PW book it’s gone out of my head. Completely.”

According to Wikipedia, the Zeigarnik Effect states that people remember uncompleted or interrupted tasks better than completed tasks. In my case, once I finish writing a book the details have left my brain.

As the story goes, Russian psychologist Bluma Zeigarnik first studied the phenomenon after her professor, psychologist Kurt Lewin, noticed that a waiter had better recollections of meals that had not yet been paid as opposed to those for which he received payment. After the server had completed the task –the meal was eaten and the check was paid – he was unable to remember any details of the orders. Zeigarnik then designed a series of experiments to uncover the processes underlying this phenomenon. Her research report, published in 1927, showed that participants who were solving a puzzle or constructing a box – and were interrupted – were able to recall the details of their actions (which side went with another side, for example) around 90 percent better than those who had completed the tasks undisturbed.

Why does this happen? Nobody knows for sure, but shrinks believe that we don’t like to leave tasks uncompleted so our brains keep it fresher than if we had finished the job. Actually, this may explain why, when you’re fretting about a tricky plot point, you wake up in the middle of the night with a solution. You subconscious was working on it all the time. Another possibility is that we tend to recall negative experiences more than positive ones. Not finishing a task is negative, and we hold on to it longer. Other theories have been put forth, but I like to think that when you’re done, you’re done. You don’t have to think about “it” any longer, and your mind is happy to comply.

There you have it. You can rest easy knowing that the Zeigarnik Effect is normal. There is no cure, but knowing that your malady has a name can be palliative and reassuring.

What was I saying again?